4 Reasons You and Your Spouse Fight About Money

Home > Spend  > 4 Reasons You and Your Spouse Fight About Money 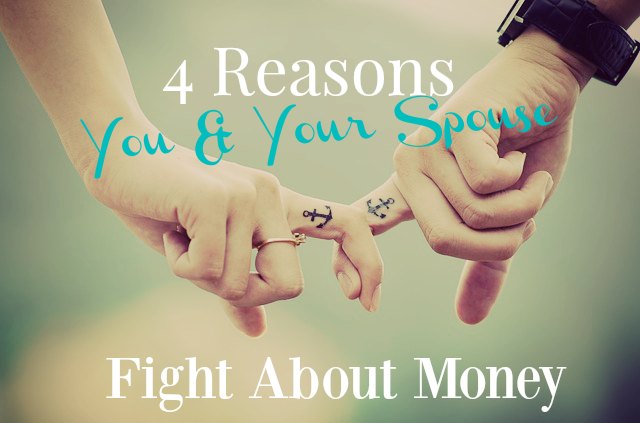 06 Sep 4 Reasons You and Your Spouse Fight About Money

Posted at 12:56h in Spend by Lacey Langford, AFC®
Share

No one likes to fight about money, but relationships and finances can be tricky. You’re building your life together and planning for the future. There are kids, family, jobs, and your goals to manage in addition to taking care of your relationship. Money isn’t the most important aspect of your life but it sure as heck is weaved into everything. Fighting about money is stressful and can be soul-crushing, especially when it’s with someone you love. Both of you know it’s not good to fight about money, but yet it keeps happening again and again.

To stop the circle of fighting about finances you need to get to the root of why you’re bickering about it. These are the four common reasons I see spouses fight about money.

4 Reasons You and Your Spouse Fight About Money

When we think of bad financial behavior, we think of a spendthrift, someone who spends money like there’s no tomorrow. Being married to someone like that is stressful, to say the least. It makes it difficult to plan, pay bills on time, and count on that person financially. On the opposite side, some save money like they’re going to live to be 1,000—it’s painful for them to spend money.

Being in a relationship with someone with extreme financial behavior leads to problems because both types of behavior cause a constant state of anxiety about money. On the one hand, you’re praying your credit card isn’t rejected because it’s been maxed out and on the other, you’re worried your spouse will berate you for buying a pack of gum.

It may be time to call in an expert. You aren’t going to suddenly make that person change. Speaking with a financial counselor, coach, or even a therapist can help work through extreme financial behavior. A financial expert not only brings the expertise but is also a neutral third-party and, therefore, will bring a fresh perspective to the problem. They aren’t there to dredge up the past, but they do want to focus on a better financial future for you.

Like it or not, the way you’re raised with money plays a major role in the way you handle your finances now. If your parents never managed their money and fought about it every payday, or if they micromanaged every penny they made, it affects how you manage money. Either way, your past financial mentors (like it or not) play a part in your money management now.

It can be tricky to be in a relationship with someone who was raised differently than you were with money. Maybe you were raised to live on less than you earn and to save a lot but you’re married to a spendthrift who likes to spend and grew up in a household where it was normal to have the power cut off because the bill wasn’t paid.

Look at your past experiences with money management but don’t dwell on it. Identify negative behaviors your repeating and make a plan to change the habit. Use helpful tools like budgets, automatic bill pay, or savings to develop new healthy habits. There also needs to be a discussion about your money management plans as a couple, which leads me to my next point.

Communicating about money problems is essential for financial success. Not discussing an issue leaves room for anger and resentment to build up. It won’t just disappear if you ignore it—rather, the resentment will grow and grow until it pops. Some examples I see most often are not discussing how long one spouse plans to stay home with the kids or how many kids they’re going to have. The working spouse may be thinking one date for the other to get back to work while the other spouse is thinking about having another kid. These are major issues that need to be discussed openly and honestly to avoid fights about finances and life plans later.

Make it a date. Set up a time and place for you and your spouse to talk household shop. Discuss not only your family goals but your personal goals. If you’re thinking about going back to school or having another child, having a talk, and making plans together helps keep you on the same page.

I coined this term after seeing it so often. When people want something and know they shouldn’t spend the money, they use this excuse to justify spending money they don’t have. They simply say, “I deserve this” to permit themselves to buy that thing they want. It’s particularly common during deployments. The deployed spouse says, “I’m sacrificing every day, not spending any money, I’m away from my family—I deserve to buy (fill in the blank).” Their spouse at home says, “I’m here alone taking care of the house, the kids, family—I deserve to buy (fill in the blank).” With both spouses buying more than they should, spending gets out of control, and the fighting begins. They want to know why the other is spending on things that they either don’t need or can’t afford.

This goes back to number 4, communication. Discuss spending. You both work hard and deserve nice things, but that doesn’t give you a blank check to write every time you want something. Set a budget first and discuss how much petty cash you can each spend in a month. Decide on a “meet-up money limit;” if you want to spend X amount of money, you have to meet-up to discuss it first. Maybe $50-$100 over your petty cash limit needs to be talked about. By doing this, it will help avoid overspending and the fight about money.