Why I Love Sara Blakely 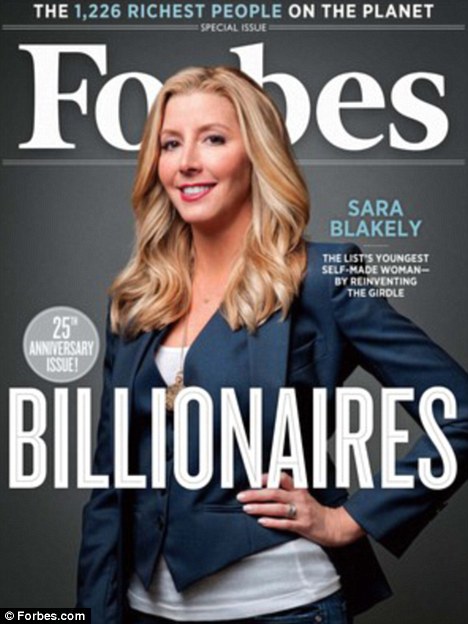 02 Oct Why I Love Sara Blakely

As people close to me know, I like to bring up Sara Blakely whenever possible…I love her! I say a lot of “Sara does this,” “Sara does that,” or “Sara wouldn’t do that,” as if we’re friends. If you don’t know my dream business buddy, she’s the inventor of Spanx, a product that’s a staple for most women around the world. I’m a huge fan of Spanx, but they aren’t the reason I’m obsessed with the queen of women’s undergarments. The fascination comes from how she created a billion dollar business and how her methods apply to every woman managing their financial life.

It all began with the idea of cutting the feet out of her pantyhose to make her butt look better in a pair of cream-colored pants (I wish I’d thought of that.) When she had this genius idea, she kept it private for a long time. She protected it, not from people trying to steal her idea, well maybe, but mainly from naysayers telling her all the reasons why it wouldn’t work. 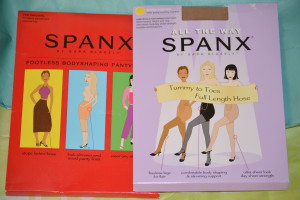 When you’re attempting to accomplish something new, it’s hard enough dealing with the little problems involved with what you’re doing, let alone adding others’ negative input to the mix. For example, you’ve decided to get out of debt. It’s hard, you’re making sacrifices to save more money, and then you tell your sister your goal. She brings up the sweet $300 Frye boots you put on your credit card last week or that you’ve tried this before, and it didn’t work. Now doubt sinks in and makes it more difficult.

My BFF, Sara, kept her idea private until she formulated a plan and gained confidence. Then she shared it, regardless of other people’s feedback. Most people close to you mean well, but often their BS backpack with all their life problems shows up to tell you all the difficulties that’ll pop up when you’re trying to reach your goals. Keeping your money and life goals quiet for a while will give you time to build confidence it what you’re doing and give you a shield to withstand others’ feedback. Remember there’s only one authority on your potential…YOU.

The next part of Sara’s Spanx journey was keeping her costs looow and not borrowing money. She only had $5,000, which was all the money in her savings account. If you’re new to my work, I’m big on keeping costs low when running your financial life. To reach her goals she needed to patent her idea but couldn’t afford the thousands of dollars it would’ve cost, so she wrote her own patent for Spanx. Sara was also the model for the design and had her artist mother draw it for the patent filing. Of course, she had to do a ton of research to make that possible. But, by putting the time in, she saved the little money she had for other expenses. When you’re reaching for your financial goals, it’s crucial to keep expenses down to put towards your goal. If you’re saving or trying to pay for the tango lessons you’ve always wanted to take, then spending less on eating out or new clothes will free up money to put towards goals. Also, keeping costs low allows you to save for things you want versus borrowing money. Not owing money gives you more freedom to follow dreams.

I should add here that Sara Blakely’s only business experience was door-to-door fax machine saleswoman. When she started Spanx, that was her job. Many times in my initial meetings with clients, they tell me they can’t manage their finances because they “aren’t good with money” or have no idea where to start. I find it fascinating that Mrs. Blakely created an empire in an industry she knew nothing about. She started from an idea/goal and took it from there by researching and learning. I think that if you have financial goals, inexperience isn’t an excuse to not do it. In fact, Sara has said that her lack of knowledge about the industry was an advantage. So if you’re letting the fact you don’t know anything about money stop you from getting your personal finances in order, then you need to jump right in and start figuring it out. It may be a little work, but the reward will be worth it. 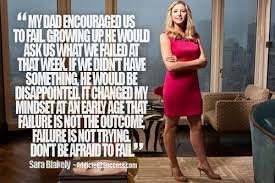 I could go on and on about Sara Blakely, but the last thing I’ll mention is my favorite— failure was part of her process. Growing up, her father taught her not to fear to fail, but rather to try, and then learn from mistakes.   This also applies to money management. There isn’t a perfect way to manage money. I’ve messed up money decisions, and so has everyone around you. Please don’t let the fear of not doing everything just right stop you from making improvements. There’ll be mistakes along the way, but they’ll help you in the long run—failures are part of the journey to self-improvement.