All You Need To Know About The BRS

Home > Invest  > All You Need To Know About The BRS 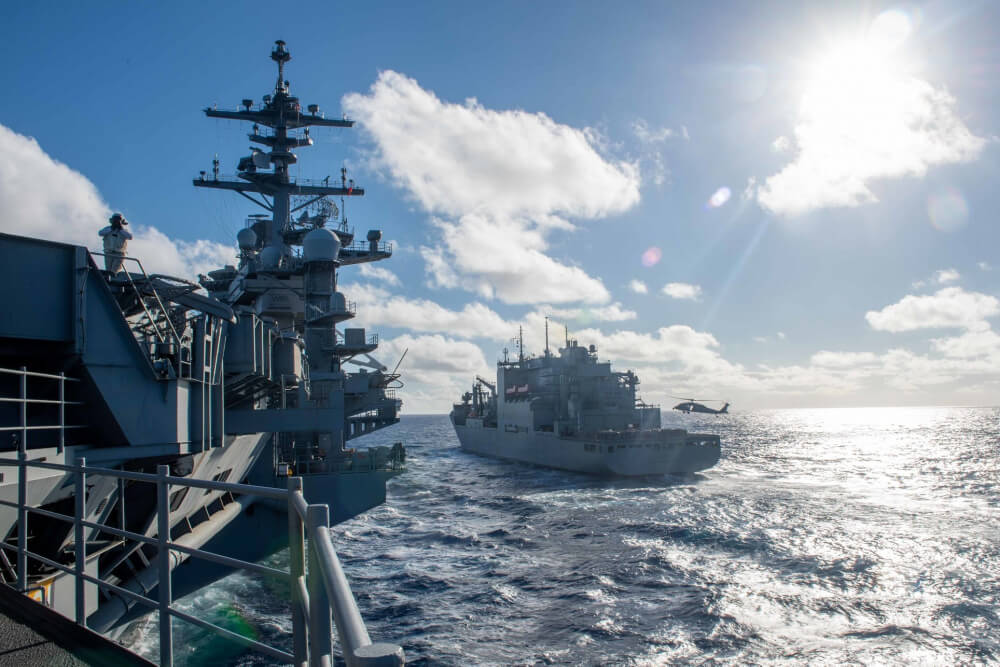 05 Aug All You Need To Know About The BRS

Posted at 12:31h in Invest by Lacey Langford, AFC®
Share

The Department of Defense (DoD) has a new Blended Retirement System (BRS) as of January 1, 2018.  The BRS is similar to how the current, legacy system, works.  For some Service members, the BRS will not affect your retirement because they’ll be automatically grandfathered into the current system due to their years of service.  But for the rest, a decision will need to be made.  Will you stay in the legacy system or go into the BRS? There are differences between the two systems and understanding those differences are relevant to your opt-in decision.

I’ve put together an overview of the present system compared to the BRS to help you navigate the changes and make an informed decision about your financial future.

If you joined the service before January 1, 2006, or have more than 12 years of service, the Blended Retirement System doesn’t apply to you. There’s no decision you’ll need to make—you’re grandfathered into the current system. However, if you’re in a leadership position, you need to be spun up on the BRS regardless, to help those you supervise.

If you joined the service after December 31, 2017, the BRS is your retirement. There’s no decision you’ll need to make—you’re automatically in the BRS. Unless you change it, 5% of your base pay will automatically be put into your TSP account.

If you are active-duty with less than 12 years of service or a National Guard or Reserve members with fewer than 4,320 points as of December 31, 2017. into the BRS.

Related content: Making the Decision Between the Traditional vs. Roth TSP

Today’s military retirement system is a defined benefit plan. The benefit is a monthly check, better known as a pension after serving 20 years. Member’s monthly payment is calculated by the following formula: your highest 36 months of base pay times your years of service, times 2.5%.  (NOTE: For reserve, divide your number of points by 360 to get your years served.)

Also, there’s the option to sign up for the Thrift Savings Plan (TSP), the government’s version of a 401k. The TSP allows you to save money in a tax-advantaged account for your retirement. In the old system, the Service members are responsible for signing up for the TSP on their own with no contributions or match from the DoD. 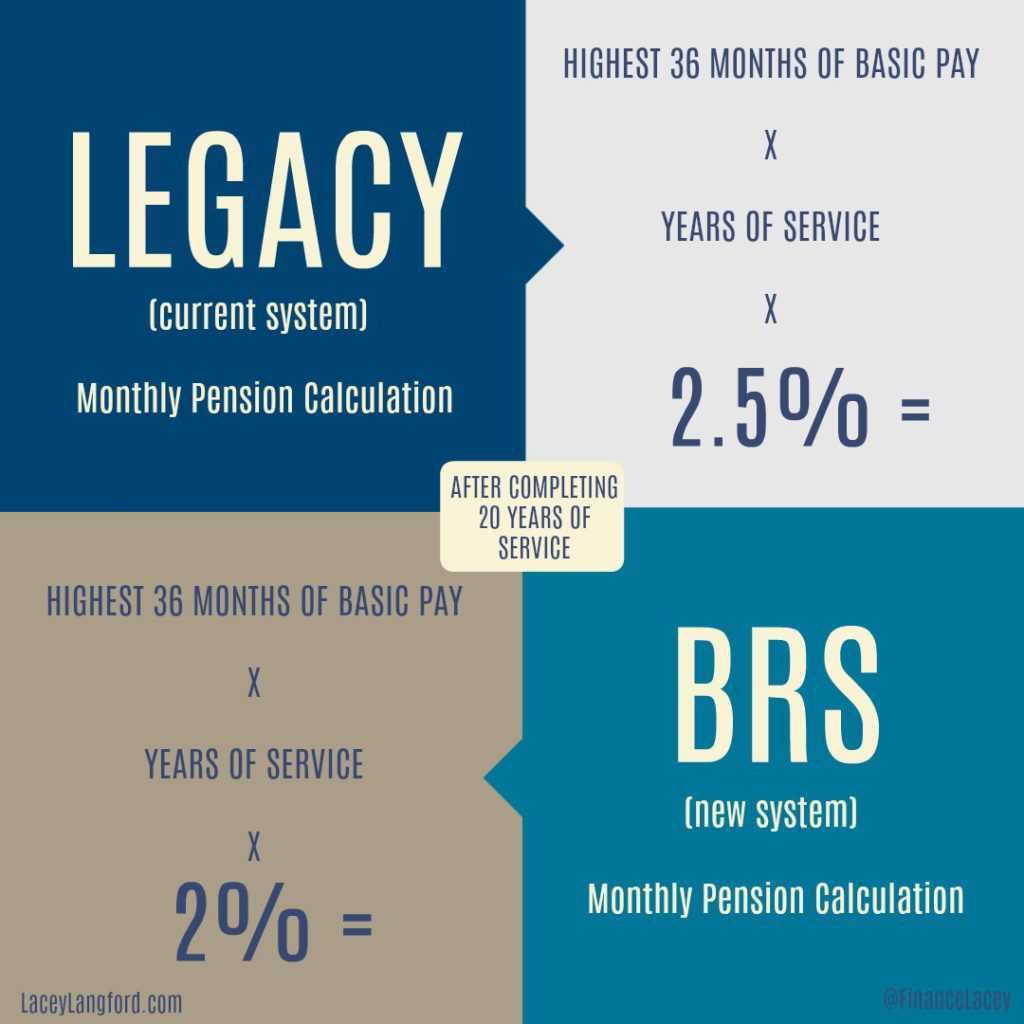 The second part is continuation pay. Which is a cash payment if the member commits to at least three more years of service at their mid-career mark (8-12 years). The third part is the pension. After 20 years of service, you’ll receive a pension but at a reduced amount compared to the Legacy System. In the BRS, the monthly pension is calculated as follows: your highest 36 months of base pay X your years of service X 2%. The multiplier goes down from 2.5% to 2%. In the BRS, sign-up for the TSP is automatic for those joining after January 1, 2018. 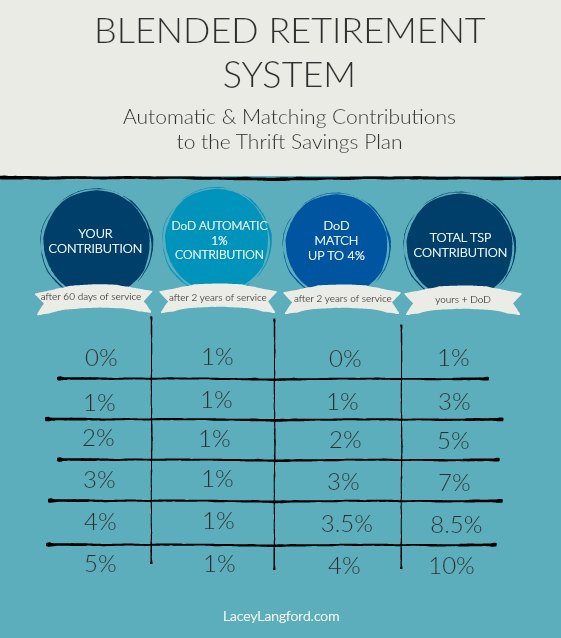 More on the Thrift Savings Plan: The Best Uses of the G Fund for Service Members

Once you’ve made the decision to opt into the new retirement system— it’s a done deal. Opting in can’t be changed later, it’s irrevocable. Once an opt-in to the BRS is selected, the Service member will start to receive the automatic matching contributions they qualify for, starting the next pay period.

For those choosing between the new and old retirement system, have no fear. The Department of Defense knows members need all the facts before making an educated decision. Because of that, they’ve educational courses and financial calculators for Service members to use. 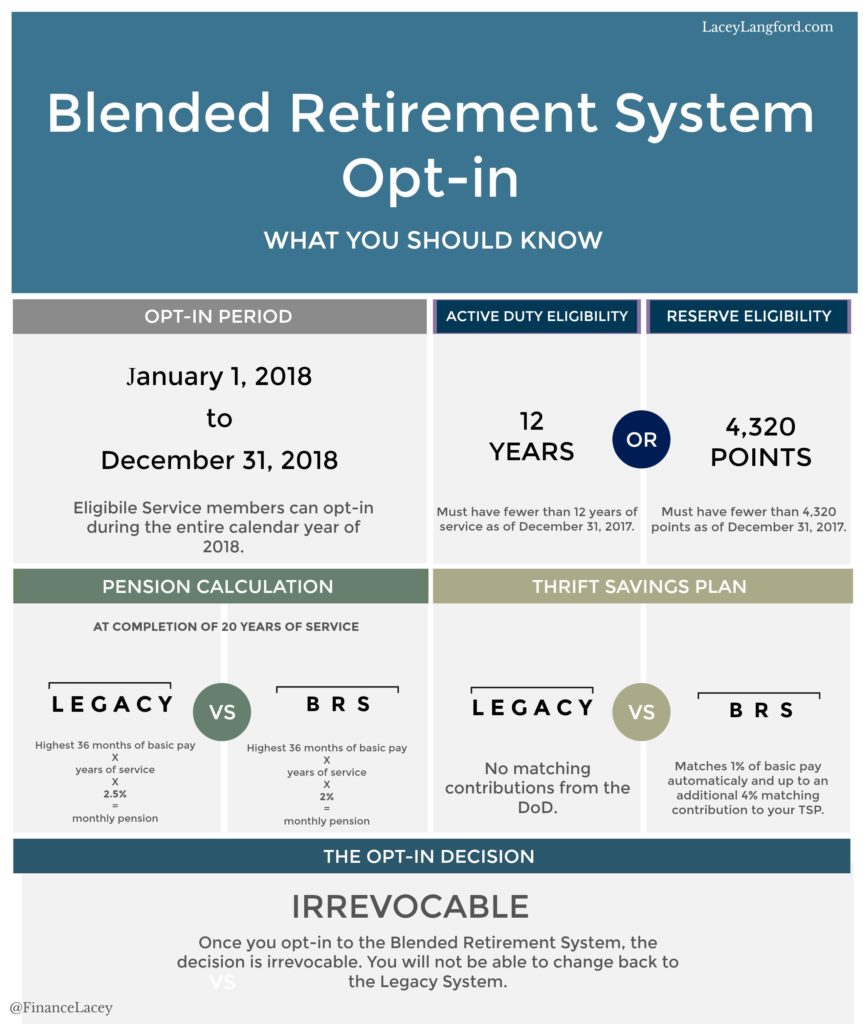 If you want to “kickstart” your finances in the military, you can get access to my free Financial Kickstart Kit here.